Share a memory
Obituary & Services
Tribute Wall
Read more about the life story of Vito and share your memory.

Vito Mastrolia, 88, of Lebanon, NJ, formerly of Belleville, entered into eternal life on January 23, 2023 in his home, surrounded by his three devoted daughters and family.  He was born on January 2, 1935 in Palomonte, Province of Salerno, Italy to Antonio Mastrolia and Carmela Mazziotta.  Vito began working on his family’s farm at age five and attended school for five years before he left to work on the farm full time.  He was the youngest of his parent's seven children and was everyone’s baby.  Although Vito grew up in difficult times and his family lived humbly, Vito remembered his early life fondly.  Vito loved his home country deeply, but he was determined to pursue a better life for his family to escape poverty.  Around age 12, Vito made the decision to begin the immigration process and at 20 years old he ventured to the United States.  Vito departed from Naples on March 23, 1955 on the Vulcania, where met his lifelong friend, Anthony Perna.  Together, they arrived at Ellis Island on April 4, 1955.  Vito was sponsored by his oldest brother Joseph and wife Rose, who took him in to begin his life in the United States.  After Vito immigrated to the United States, he taught himself to read, write, and speak english.  He arrived with debt, and no matter his fears or doubts, he had to persevere to reach success in this foreign land.  Even when he wanted to give up, he never did.  Vito could have never imagined the beautiful life he would create when he stepped off the boat.  He worked tirelessly his entire life to support himself and his loved ones.

Vito and his wife Mary Di Genova were married on April 23, 1961 at Holy Rosary Church in Jersey City.  They settled in Belleville, where they raised their three daughters.  He worked numerous laborer jobs before spending the majority of his career as a butcher at Engelhorn & Sons in Newark.  In 1980, Vito decided to relocate his family to Lebanon.  Vito missed the rural landscape of Italy and wanted to bring his family back to his roots.  At his home in Lebanon, Vito was able to return to the simple life.  He cultivated an enormous garden that yields enough produce to feed his entire family.  Even as he aged, Vito would often spend over ten hours a day working his land, which he continued every season until now.  He worked as a school bus driver before retiring.

Vito was witty and naturally poetic.  He saw simplicity where there was struggle.  His drive was always stronger than his doubts.  He often spoke in metaphors, making the best comparisons.  Vito continued to learn everyday through reading.  His advice was always hard and short, and his energy never-ending.  He pushed himself and others to go on no matter the struggle or circumstance of life.  Vito exemplified hard work and determination.  He was also a bit superstitious and valued integrity.  The essence of Vito’s being shined when he played checkers, especially when playing with his grandsons, or his life-long friend Joe Tenerelli.  Vito loved to debate before and after a game, but during a game he was silent, strategic, studied and serious.  He did not speak during checkers, but happily enjoyed a glass of wine and some loud Italian music.  Ultimately, Vito traveled the world but showed his family that there is no place like home. The best part of Vito’s life and what he loved most was the simplistic bliss of enjoying his homemade wine, good Italian cheese, and sharing all of the food he grew with friends and family.  Vito worked and fought like a bull his whole life while overcoming tremendous adversity, sacrificing everything to give his family the American Dream.

The beloved husband of the late Mary Di Genova Mastrolia, is survived by his daughters, Carmela and husband Russell Surace of Hillsborough, Margaret Anne Cozzarelli of Nutley, and Maria and husband Arthur Muth of Hillsborough.  Additionally, he is survived by his beloved grandchildren, Nicole (Muth) and husband Jonathan Bryan, John Paul Cozzarelli, Alexandra (Muth) and husband John Bastardo, Russell Surace, Nicholas Cozzarelli, Michael Surace, Marc Cozzarelli, Jessica Muth, Angela Surace, great-granddaughter Delia Margaret Bryan, and his sister Domenica Benevenga of Nutley, as well as many loved relatives and friends. Vito is predeceased by his loving wife Mary of 61 years, his parents Antonio and Carmela, his siblings Joseph, Antonio, Pasquale, Maria, and Palma, and many dear relatives.

The Mastrolia family will receive guests on Thursday, January 26th from 4:00 PM to 8:00 PM, and on Friday, January 27th at 9:15 a.m. at the Biondi Funeral Home, 540 Franklin Avenue, Nutley.  A Funeral Mass will be celebrated on Friday, January 27th, at 10:30 a.m. at Holy Family Church, 28 Brookline Avenue, Nutley followed by interment at Holy Cross Cemetery, North Arlington.  In honor of Vito, donations can be made to St. Jude Children’s Research Hospital, https://www.stjude.org/donate/donate-to-st-jude.html.

To send flowers to the family or plant a tree in memory of Vito Mastrolia, please visit our floral store. 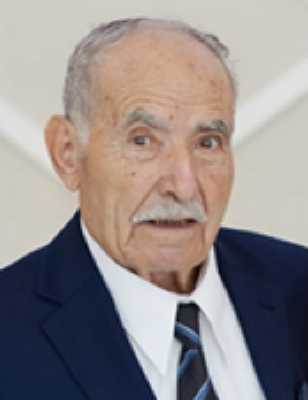